Quantifying the Magnitude of the Truck Problems on Waller, Rideau and King Edward

Waller/Rideau Street, and King Edward Ave. have served as the major interprovincial truck route in the National Capital Region for 47 years since the Macdonald-Cartier bridge was constructed in 1965. The effects of the resultant high volumes of heavy trucks is quite evident in the number of abandoned and decaying buildings and lack of development along this corridor.

According to the most recent truck study performed under contract to the MTO in 2007 the volume of trucks on the Macdonald-Cartier bridge had reached 2630 per day, of which 1630 or 62% were tractor trailers. 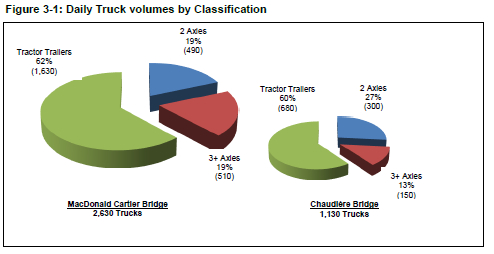 In order to translate these daily totals into something that describes what a person walking or standing along this corridor might experience it is interesting to view the truck flows as a function of the time of day. From the same study: 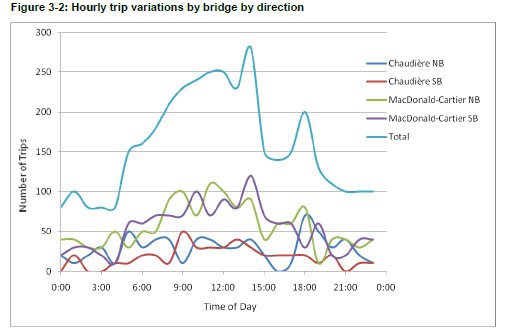 What this chart reveals is that between 9am and 3pm during the day the truck traffic on the Macdonald-Cartier bridge (ie. along Waller/Rideau and King Edward) averages about 90 trucks per hour in each direction. A person situated along any one of these streets
experiences a truck passing by every 3600/90=40 seconds in each direction. This represents an experience of one truck every 20 seconds when both directions combined are considered. Recall that 62% of these are tractor trailers.

As a further illustration, these trucks follow Rideau Street for a 2 block section between King Edward and Waller street. This section involves 3 traffic lights which normally are operating on a 105 second cycle and trucks must turn at 2 of these 3 traffic lights. As a result almost all of the time, trucks are taking at minimum 2-3 minutes to traverse this section of Rideau St. Considering that the rate of trucks arriving on the corridor is one every 20 secs during the daytime, this means that at any one point in time there are normally between 4-6 trucks present on this 2 block section of Rideau street. Occasionally there are even more than 6 trucks.

The presence and flow of this volume of trucks along this route should now be considered against the backdrop of other activities that are happening along these corridors. There are 3 intersections along this truck corridor which are traversed by 5,000
to 10,000+ pedestrians per day. (Waller / Mackenzie King Bridge, Rideau / Cumberland, and Rideau / King Edward). 5,000 pedestrians times 2630 trucks times 3 different intersections is a safety risk we should not be taking as a City.

The incongruity of this level of truck traffic on a corridor with this level of pedestrian activity in an urban context is a situation that cannot continue to be tolerated for very much longer. The implications to safety, health, and the general urban environment are no longer acceptable, especially considering this has been ongoing for 47 years. Ottawa City Council must act soon.

Finally, it is important to understand something of the nature of these truck trips through the downtown. The same study concluded that only 230 or 6% of the daily trucks were simply passing through the region. The other 93% of the trucks had an origin or destination (or both) within the National Capital Region. The bulk of the truck traffic in Ottawa’s downtown is not simply long haul trucking between Gatineau and Montreal.