The formal circulation of the planning application for the 2 Robinson/320 Lees development has been released. Below is a link to the application on the City’s Development Application Search Tool where you will find information about the application and all of the submitted plans, reports, surveys and accompanying documents needed to review the application.

Please comment directly to the File Lead using the contact information detailed in the application summary below or through the “Send Feedback” link of DevApps. (Please note the deadline date for comments is December 31, 2021)

Per the City planner:

New material is available on Devapps HERE. See plans dated 2021-07-06. The applicant, in response to comments received to date, has submitted revised plans, and made significant changes to the site layout, building design, connectivity, and green space / park land.

Four+one major missing links or obstacles were identified during the meeting (see plan below for locations): 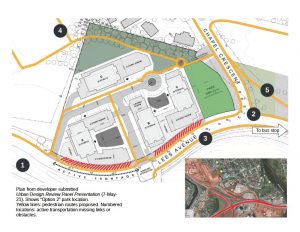 Vital connection from 2 Robinson to MUP for access northwards to UofO, downtown, centretown etc. and south to Lees LRT Important link for Robinson Village (RV) as well as 2 Robinson.

Width and speed of traffic on Lees make it unsafe for pedestrians to cross. Expect some traffic calming from planned extension of bike lane west across junction which will narrow road. More re-design may be required, e.g. raised section.

This is the non-standard narrow asphalt surface sidewalk between bus stop and planned traffic light controlled junction at Robinson & Lees (will include one of 2 vehicle accesses to 2 Robinson). MF suggested widening (~2x) existing asphalt path to allow winter maintenance as interim measure until sidewalks etc on Robinson are built.

Developer plans to re-instate path running along north of site from/to Chapel and SH Arena. This route is a vital active transportation link to the west side of Sandy Hill from 2 Robinson and Robinson Village. Section running NW from edge of site beside existing arena building is too narrow to support two-way pedestrian/bike traffic at the moment. Property belongs to NCC, will require at least City & NCC to collaborate to bring the path up to standard.

An additional concern is:

The footpath connecting Robinson Village to Lees can be expected to see significantly more traffic when the ~350 units under construction in RV are completed. Traffic can be expected to increase again when 2 Robinson is developed (traffic from/to 2 Robinson and the river path, traffic from/to RV to the NW via the re-instated route through 2 Robinson). The path is currently not in good repair (uneven, broken in places asphalt surface) and is probably not up to current standards for a shared pedestrian/bike path (e.g. width, surface markings, signage). We need to press the City to upgrade the path in tandem with the 2 Robinson development.

Thank you to everyone who contributed to the survey, see below for link to responses.

A community consultation for the planned development at 2 Robinson Avenue took take place via Zoom on March 4th. The online consultation included a presentation from the developer and city planning staff, before opening the conversation up to residents.

Recording of the meeting:

The slides presented by the developer are lower down in this post, click here to jump to the slides.

Action Sandy Hill and a group of interested residents and stakeholders from Coop Voisins, Robinson Village, Ottawa Community Housing and the Sandy Hill Community Health Centre are seeking Sandy Hillers’ feedback on a development being proposed for 2 Robinson Ave.

The group meets with City staff, the Councillor and the developer to defend the neighbourhood’s interests. We want to hear from residents to inform and strengthen our points. We also welcome new members! Let ASH know your interest by sending an email to info@ash-acs.ca

The 2 Robinson site is the former Iranian Community Centre, located directly to the south of Strathcona Heights, on the west side of Chapel at Lees [click for larger view]: 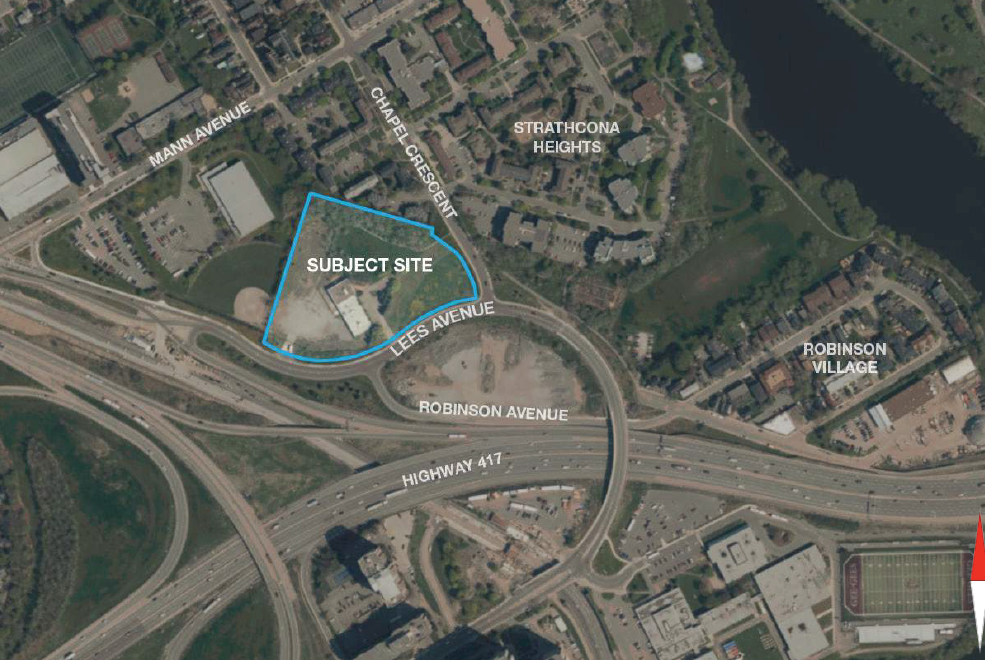 The documents accompanying the first stage of the developer’s application, can be found here: https://devapps.ottawa.ca/en/applications/D01-01-20-0028/details

At this time, the biggest item the developer is seeking to amend is the zoning bylaw, to allow four 30-storey towers (where normally only 20 storeys would be allowed).

The next stage in the application process is called Site Plan, and this is where further details on the buildings, their units, floorplans, etc. will be provided.

Until then, we are working with numbers of up to 3,250 new residents in this development (Sandy Hill has about 15,000 residents currently). Over 900 parking spaces are being proposed and this meets the minimum parking requirement in the zoning rules, as well as 1,190 bike stalls, many stacked.

The City receives from the developer monies to pay for the additional infrastructure required for the development. The City also receives extra monies if the developer’s requested amendments are permitted.

1) The development is very large. The major amendment the developer is seeking – to increase the height by an extra 43 stories in total – is a leverage point to negotiate for additional features to the site, such as affordable housing, only if the community is willing to accept the additional density the extra stories mean.

2) The developer is interested in affordable housing but is not obliged by City rules to have any.

3) The developer has said there will be a mix of 1-, 2-, and 3-bedroom rental units, but has not said how many of each, and at this stage in the process, does not have to be specific. The greater the mix, the greater range of demographics can be served.

4) The developer is proposing a public park at the southeast corner of the site, at Chapel and Lees.

5) The core group of residents and stakeholders have to date indicated they want to see: 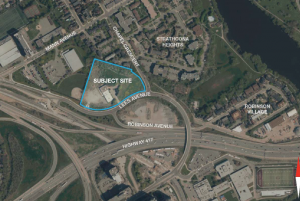