Study will evaluate feasibility of tunnel between bridge and Hwy. 417

Ottawa – The study of a possible solution to heavy traffic in downtown Ottawa will investigate the technical feasibility of connecting the Macdonald-Cartier Bridge and Highway 417 with a tunnel, with the primary goal of removing large trucks from downtown streets.

Each weekday there is heavy inter-provincial truck traffic between Ottawa and Gatineau, about 3,750 trucks daily, 2,600 of which are using the Macdonald-Cartier Bridge and go through the communities of Lowertown and Sandy Hill to reach Hwy. 417.

There will be two parts to the study of a tunnel alternative:

Phase One: The first part of the study will assess the technical feasibility of constructing a tunnel and its portals; impacts of portals on adjacent land use, transportation facilities and buildings; ventilation requirements and impacts; potential conflicts with existing utilities and the Confederation Line; geotechnical analysis; the feasibility of using the tunnel by trucks carrying dangerous goods; other relevant tunnelling issues, and construction costs.

Phase Two: If a tunnel solution is deemed technically feasible based on the analysis completed in Phase One, the second phase will go into more depth, and look at issues such as the likely utilization of the tunnel by long-distance trucks and cars; potential community impacts; as well as the potential for repurposing surface streets.

There are a number of examples of tunnels built or planned in North America. These include:

Although the Ottawa study will look at the potential of diverting traffic from surface streets, the objective of this project is to remove long distance trucks from the surface streets and not to accommodate the potential growth of interprovincial car travel. This is keeping in line with the emphasis on investing in public transit that was part of the recently unanimously approved Transportation Master Plan.

The study will be carried out by an engineering consulting firm with expertise in transportation and tunnelling. The estimated study cost is $750,000.

If the study determines that such a project is feasible, there would be a subsequent environmental assessment study that would include extensive public consultation.

The graphic below provides a visual representation of the study area, including some of the potential portal locations for the entrance and exits to the tunnel. 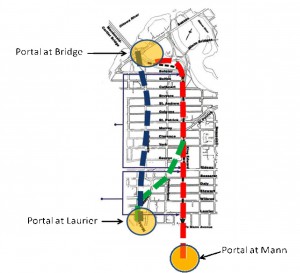