Simard House, located at 31 Sweetland Avenue, won the City of Ottawa’s Award of Excellence for restoration of a residential property. The Simard House (1884) is a rare example of a modest, Second Empire style house that is designated under Part IV of the Ontario Heritage Act. Restoring this structure using historical materials and based on historical evidence was a significant achievement, given its severely degraded condition. The jury noted: “The addition harmonizes well with the existing structure, and demonstrates that a combination of careful attention to details, materials and scale does not add significantly to immediate costs but adds value to the property over time. The creation of five apartments within a relatively small structure addresses both heritage conservation concerns in a Heritage Conservation District, and provincial policy that favours intensification. This restoration project proves that heritage structures can be brought back from the brink, and should be.” 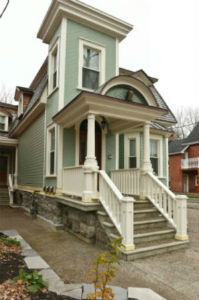