If you happen to stroll by on Goulburn Avenue, between Somerset Street East and Templeton Street (closer to Templeton), you will notice a beautiful mural.

The concept was born last October when France Girard visited her daughter in Philadelphia, which boasts the largest mural art program in America. France came home inspired to sponsor a mural in Sandy Hill and thought ‘why not in my own backyard?’ literally. She shared her idea with her neighbour and artist, Claire MacDonald, who connected France with a fourth year Fine Arts major at the University of Ottawa, Katie Wilde. France had hoped for a mural marrying Nature and Spirituality. Katie’s work totally exceeded her expectation as it also concretely incorporates some of the most magical places France has had the opportunity to visit–the Himalayas, Northern Thailand and Laos, Sedona, Croatia, and not the least, Gatineau Park. Katie also produced a mandala detailed with real moss. France was really touched when Katie admitted that she had really gone all out with the mural in part as a thank you and legacy to our neighbourhood of which she has so many fond memories of her university years here.

I LOVE the mural. It has already been catalyst for many smiles and dialogues with many of my neighbours. I hope it inspires others to contribute to more art in our ‘hood. 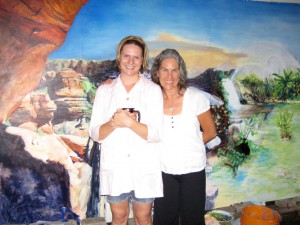 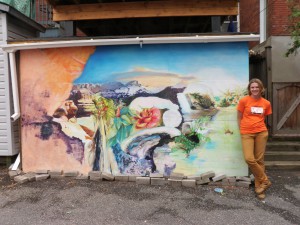